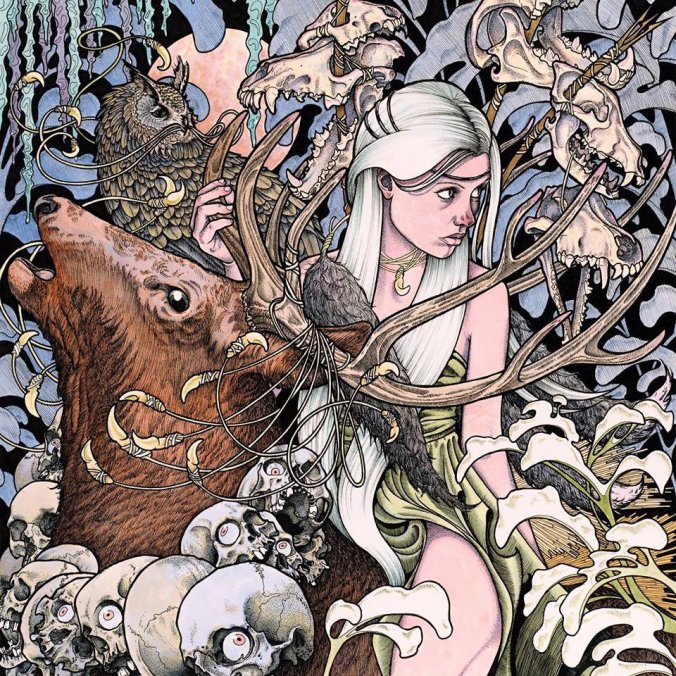 If there is hope, it lies in the proles (c) George Orwell, 1984. If there is hope for Hardcore music, it lies in Crust. Totem Skin is a band from Sweden that combines Crust, Punk and Post Metal to create some pretty epic musical pieces. One could use the terms Dark Hardcore or Neocrust to describe their music, but that would be a bit of a cop out and it’s more informative to list individual constituents anyway.

I discovered Totem Skin’s Weltschmerz almost a year ago, in October 2015. One of my friends posted a link to the album on bandcamp and, attracted by the cover art and the genre tags, I gave the album a quick listen. At that point in time I haven’t heard anything interesting in quite a while, so anything new was very welcome. The album sounded very fresh: it was a concoction of a few different genres and the sound was quite good as well. Some might say the album is a bit over produced, but with Crust releases having notoriously bad production, it was nice to listen to something clearly audible.

The first track, Always Ire, begins with a slow guitar piece, then a quick Black Metal inspired bridge is followed by blast beat drums, frantic guitars and shouted vocals. The first thing that comes to mind is Blackened Crust, though, there actually isn’t much of a Black Metal influence on this album. The track proceeds at a fast pace until it gradually slows down to an epic Post Metal ending with tremolo picked riffs. What a great way to open an album!

The next song, Longing Leans and Beckon, starts with an upbeat riff and continues in that vein until about halfway through the track, where the mood suddenly changes to something much more sombre. This is a technique the band uses quite often on this record. The rest of the tracks are quite good and memorable too, there is absolutely no filler on this album.

The best song comes at the very end and clocks in 15 seconds shy of 9 minutes. I De Blindas Rike Är Den Enögde Kung starts with a 6.5-minute long Post Metal part that is some of the best I’ve heard in the genre. Around the 6:25 mark, when the listener thinks the albums is about to end, the track transitions into rocket speed D-beat. This song is nothing short of brilliant. The Fall of Efrafa influence is very apparent on this album, but that last track even puts the masters to shame.

Something must be said about the lyrics on this album – they are exceptionally good. Here is an excerpt from Always Ire:

He takes her within his hands,
liquids pouring from her glands.
Steadily his blows descend,
She may never breath again

One might think that this song is simply about feminism, but to get a better idea what this piece is all about one should look up the meaning of ‘weltschmerz’. The word literally translates to world-pain or world-weariness and represents the dissatisfaction with the realities of life. To put it another way, weltschmerz is despair one feels when the physical world fails to live up to the mental image or expectation we hold within ourselves. The Guardian posted a good article about this.

There are usually many ways to interpret lyrics, but in the context of weltschmerz, Always Ire appears to be a song about the Earth or Nature where ‘she’ is abused by the mankind, i.e. ‘him’. This ties in well with the cover art for the album as well.

It is very fitting, both from musical and lyrical perspectives, that I De Blindas Rike Är Den Enögde Kung picks up where Always Ire left off.

He takes her within his hands,
liquids pouring from her glands.
Steadily his blows descend,
She may never breath again

No more her touch will grace his brawn,
their vital poise forever gone
Her throne turns into his abyss
and her whimpers become his